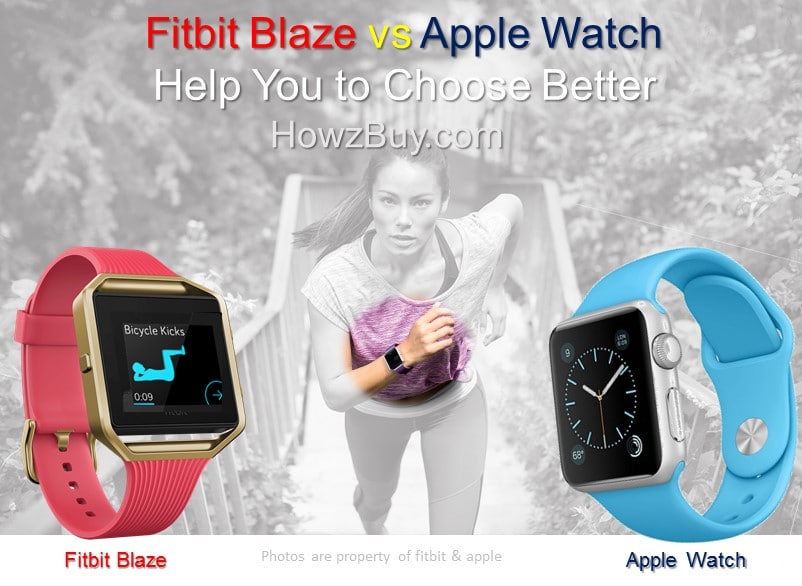 For Apple smartphone owners, who wish to try some Powerful yet low cost alternatives of Smart Watch, I have proposition of using Fitbit Blaze, which is surely Best In Class  alternative to the Apple Smart Sports Watch.

My friends who own Apple phones, say that Apple is just unbeatable, and they will never ever deviate from the Brand Apple !!! So if at all they want a smart watch it will be an Apple !!

But I don’t agree with them simply because things may not be always true and there will be good reasons to deviate from Apple to another Popular Smartwatch like the Fitbit Blaze, a more budget-friendly smartwatch & tracker with its most famous user friendly intuitive App (and most important 5-days battery life)

Apple Watch
“Be an essential part of who you are” as said on Apple’s website. With fitness tracking with add-on’s like Appointments, Text messages, Calling an Uber or using Seri to give voice commands. Needless to say about style, fits and finish which is unbeatable part of Apple’s life 🙂
Again needless to say that if you own an Android or Windows Phone, simply forget using the Apple Watch !!

Below is simple table, please have a quick look at it before you proceed to which Smart-watch you shall have …

Fitbit’s is clear leaders in Fitness trackers with its famous intuitive App, like Apple, Fitbit also has fans all over world, its king of tracking devices .. whereas Apple is known for perfection at its own, having millions of fans worldwide ! So owning Apple is like a prestige symbol for many !!!

By now you must have decided which of the watch is best for you. If you ask me I would say Blaze would be great if you love being in community, love to stay in touch with friends with similar minds pushing fitness tasks together. Blaze makes you focus on fitness tracking rather than getting lost in mini-computer having tonnes of features like Apple smartwatch !