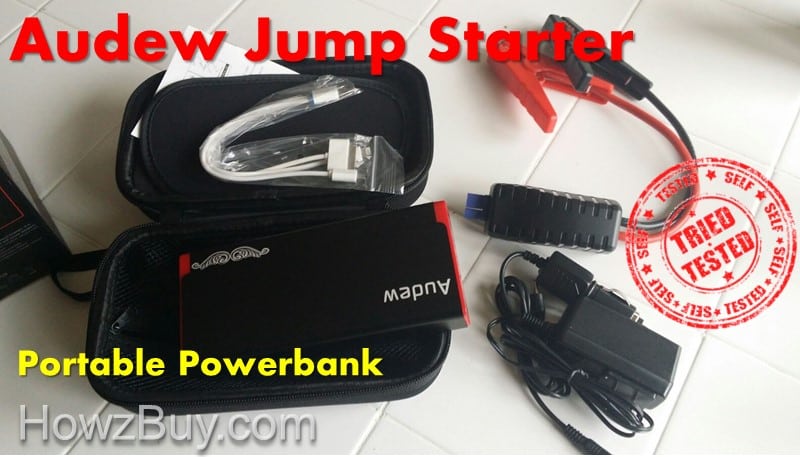 Why do I need to jump start my truck?

Main reason is that your car battery is weak or dead and unable to crank the engine!

May be because you left the headlights ON without the engine running. Or played the music system for hours with engine OFF.

Another reason is you have not used your car for longer period like 6 months, left as it is in snow.

Or the battery is older than 4-5 years and hence became weak to start the engine.

Or other technical reason such as weak alternator which is not able to recharge the battery while engine is running.

Now its clear that your car is not able to start due to weak battery and you need to start it to get to the garage or once started it will recharge the battery on its own using built in Alternator.

So in that case you have to Jump Start the car.

Steps to Jump Start Your Car or Truck

Now coming to my selection and hands on trial of  Audew Jump Starter which is also a Portable Powerbank.

First and foremost thing is that this truck jump starter has won iF International Design Award in the year 2017.

Fit and finish of this product is rich, its well built, made from an Aluminum Alloy Shell. Even the hard case provided accommodates power bank and all accessories nicely. Remember to get a photograph of how things are packaged inside the box, since later putting them back will be a challenge due to its compact nature.

Even though my cars battery was not dead I decided to try Audew Jump Starter by disconnecting battery from my car.

So I first disconnected my car battery terminals and connected jump start cables to battery positive and negative terminals. Then turned power bank ON to provide power to car starter. at that time the LED indicator on jump cable adapter turned GREEN. Now I got on to the ignition and wow .. within a second I was able to crank the engine !!

This was just to test the capability of Audew Jump Starter.

Abuse Test : SAFE to use

One more thing I tried which is connecting the crocodile clips wrongly, i.e. RED to negative and BLACK to positive terminal. The built in protection worked and the adapter showed RED indication with audible beep providing me warning on wrong connection.

As I read the manual it also has got short circuit protection built inside the chip, however I did not dare to check this function 😛

For which car or truck engine size it is suitable ?

5L gas or 3L diesel engine, and can crank them up to 20 times with 13800 mAh large capacity and heavy duty clamps and cables.

All in one – Multiple functions

This power bank is portable and useful not only for Jump starting your car but also can work as smart phone charger.

Audew lithium ion jump starter and power pack is a powerful yet compact unit which is a must accessory for every car owner. It will be life saver in case of emergency. Luckily it is also designed to be used as smartphone charger, hence its obvious that you will keep it using and charged, automatically making sure its ready to help you all the time as a Jump Starter Kit.

Specially the safety features make sure that even by mistake you will not get harmed, be the wrong connection, built in safety algorithm will make sure to shut it OFF, so even a layman can use it.