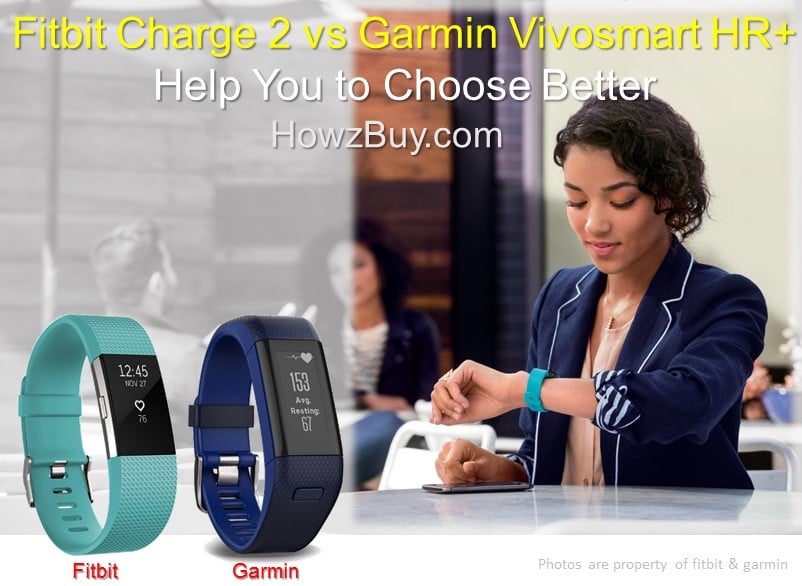 Fitbit Charge 2 vs Garmin Vivosmart HR+ [Who wins in 2019?]
In this post we will  compare Fitbit Charge 2 vs Garmin Vivosmart HR+ Tracker both pricing $150 coming from the most famous companies in world specially popular as fitness watches for women. Garmin is undoubtedly king in GPS navigation systems, whereas Fitbit is king of trackers from years, selling in millions. Fitbit with its most powerful software App still unbeatable tracker. Both the Tech giants have strengths in different areas and launched number of new trackers this year ….
[Pricing of $150 was taken in Dec 2016, Dynamic prices updated in table below]

What’s basically needed from a Fitness Tracker is Simple interface, Best battery life, Accuracy of tracking, add-on functions like Move reminder, Sleep tracker, waterproofing etc. and last but not the least is Style.

Both Fitbit & Garmin, has introduced many fitness devices, with functions & ranging prices, making it tricky to choose from !  Both fitness trackers are equally good, packed with features, I am sure you will be able to decide which one of these $150 devices to buy at the end of this post …

Which is better Fitbit Charge 2 or Garmin Vivosmart HR+ Tracker ?

What is Best in Fitbit Charge 2 ?

Fitbit has introduced Charge 2 as an improvement over Fitbit Charge & Charge HR tracker bands, firstly with much larger display, guided exercises, app assistance for analyzing the exercise you are doing, and last but not the least swappable wrist bands, which will be most important to girls & women, who just love to match the things to each extent 🙂

What is Best in Garmin Vivosmart HR+ ?

Garmin has introduced Vivosmart HR+ over previous HR with major improvement of built-in-GPS that eliminates need to carry your mobile phone with you.

How does the Software’s of Fitbit Vs Garmin Compare ?

Tip of the day : Getting wrong heart bit measurement ?

“The fitness trackers, if you wear them loose, they tend to rotate around during exercise, hence giving false indication of heart rate measurement. So I suggest to adjust the band tightness optimally during exercise”

So considering all the aspects, although both Fitbit Charge 2 & Garmin Vivosmart HR+ pricing $150, Fitbit Charge is clear winner as most utility friendly and proven tracker …
Fitbit charge 2’s Special editions : Lavender/Rose Gold are mostly popular in young girls and women 🙂 and the Black/Gunmetal edition liked by men mostly.
[Pricing of $150 was taken in Dec 2016, Dynamic prices updated in table above]

If you are interested … here is detailed comparison of Fitbit trackers …