My wife bought a smart fitness watch for me during here trip to New York. So now instead of using my smart band, since I started using this smart watch and pretty happy with the performance. Initially I faced many issues including first setup took one full day, which was merely 1 hour job (which I understood later) .. So I thought of writing here Fitbit Versa Review for all of you. If you like it do not forget to put comments on my post.

Well, Over the years fitness wearables like smart bands and now smart watches are becoming part of day to day life like a smartphone. And being high end market, there is presence & tussle of big Brands like Fitbit vs Apple, where people are ready to spend hundreds of dollars for their health.

The preliminary market started with fitness bands which are really cheap and affordable for beginners in the fitness area, which later can be graduated to a smart watch which handles full fledged health graph

So competition always focus on smartwatches which will be better and cheaper than the Apple Watch. In this category, Samsung launched the Gear Sport and Fitbit rescently launched the Versa priced about 33% below Apple smartwatch series 3.

Fitbit Versa Review [after 3 months use]

Well I found that Versa, is a stylish, attractive & best looking fitness tracker assisted with fitness tracking facilities, specially I think the Female Health [NEW] facility which is a specially designed to log women periods, their symptoms or even compare the cycle against other health stats like sleep, activity and weight. Also I found it not only function-wise suitable for women but also style wise it goes well on my daughters wrist, that this week I bought the Peach/Rose Gold Aluminium model for my daughter.

It will also be worth mentioning that my smartwatch Versa runs Fitbit OS 2.0 an Operating System incorporating Pebble assets [the company that Fitbit acquired last year]

Quick Executive summary for you:

My Recommendation : Is it value for money?

[Do scroll down to Read detailed review after the executive summary]

By now I have used this smartwatch for about 3 months, and have also started wearing it during night time due to its comfortable design and extra long battery life. Its fully functional great smartwatch indeed, I loved this super fusion design of a smartwatch with my fitness tracker ! Looks stylish still simple, super lightweight. Nothing to say about the Fitbit App which is known to be the best in fitness community. In my fitbit versa review I am strongly recommending to go with this smartwatch

[and mind it .. although I am die hard Apple fan, one of the major  reason for going with this smartwatch is the price and compatibility with Apple iOS as well as Android]

Also I did not go with the NFC version, since I don’t need it [so why to spend money for that?]

Within three months of use, on an average I really went with 2 charging cycles per week, which is fairly good as compared to an Apple Watch which needed daily charging ! Forget about it even the iPhone needs daily charging !!

One last point! before I conclude that it is Value for money smart watch!!

Because of its descent looks I am using it in gym as well as office too! It goes well with both the environments well, also as said its comfortable to sear in bed too. So in short I am able to use it for 24 hours as a real tracker and my companion too 🙂

Recently I bought a Screen Protector for my Versa, I am not sure if I really need the screen protector, but out of fear of scratching the screen thought of putting it. Simply searched on Amazon for the protector with more good reviews and best price and bought  a pack of 6 screen protectors ! so that I can replace them as needed.

Also I recommend you to see Fitbit Versa Review Video

Now lets have a look at Fitbit Versa specs and features :

Yes, fitbit versa is swim proof, you can use it during Swimming. 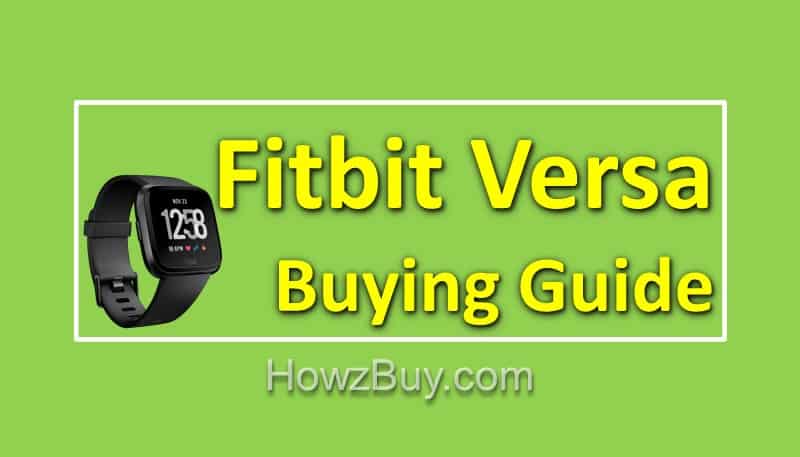 What are the features of New FitBit Versa smartwatch?

How to change band on fitbit versa

How many days Fitbit Versa can store my data ?

[stores for 7 days, daily totals for past 30 days]
[Also can Store 300+ songs]
[You can download Pandora stations or Deezer playlists.]

How do I listen to Pandora stations on my Fitbit watch?

Note that you need a paid subscription to Pandora and a Wi-Fi connection to download stations.
For information about how to download personal music and audio files with the Music app

What is Battery life of Fitbit Versa ? [4 days operation capacity]

Can I synchronize my Fitbit Versa over WiFi ?

No it can’t use WiFi directly.

However you can synchronize your Fitbit Versa using Bluetooth.

It can synchronize automatically over Bluetooth with your computer as well as 200+ leading iOS, Android & Windows devices which are compatible to Bluetooth LE.

We suggest checking compatibility of your smartphone with Fitbit Versa before buying it.

How do I synchronize by Fitbit Versa with my Computer?

Can I synchronize Fitbit Versa with my iPhone ?

Can you answer calls on fitbit versa ?

How about Music control from my Fitbit Versa Smart watch ?

How to turn off fitbit versa [unresolved as on June 2018]

fitbit versa not charging “not enough power at the source”

How to transfer music to fitbit versa

fitbit not syncing – Try the following to resolve the synchronizing issue

Why do you need to log in to fitbit with email and password each time to sync??

Where can I get fitbit versa firmware update ?

How much is the fitbit versa ?

Fitbit Versa clearly wins over an Apple Watch on size, price. The new smartwatch is priced at $200 as on June 2018.

To conclude Fitbit Versa is a full blown smartwatch, a good design at a really good price !