iPhone 7 vs iPhone 8 : What’s the difference?

iPhone 7 was released in Sept 2016 and iPhone released in 8 Sept 2017, you can see that there is a full one year gap between the launches of these two phones. So iPhone fans were expecting much from the new upgrade launch !!

Both are identical in overall design, and although there is slight microscopic variation in dimensions, an iPhone 8 will fit perfectly in iPhone 7 case !

Weight difference is slightly more pronounced, the reason behind it is due to the actual build materials, while iPhone 7 is constructed with all around aluminium materials in uni-body format whereas the iPhone 8 is constructed out of glass panels in the front and rear surrounded by the metal band around the perimeter, the glass build causes that extra weight added to iPhone 8.

There is really no way to assign a win here based on build materials since both the aluminium and glass builds offer a premium sensation. Some people may prefer the smooth and solid aluminium build while other people might prefer the shiny and reflective glass build. either phone looks premium anyway.

However the glass build offers two downsides, firstly it will be a finger print magnet and secondly it will be more prone to cracks and shatters after dropped on a rigid surface.

Now all around we have the same buttons and the ports.

Both phones have duel speakers for stereo sound, the difference is that iPhone 8 speakers are now 25% louder than the iPhone 7 speakers.

iPhone 7 already have best in class speakers and the iPhone 8 simply improved upon that.

No they are not waterproof! Both iPhone’s offers ip67 grade water resistance so you are fully protected from dust, sand, water splashes and rain showers. By definition of ip67 grade, they are fully protected from dust (6) and can also withstand being submerged in 1m (about 3.3 feet) of static water for up to 30 mins (7). Remember here the word static is very important, hence when the iPhone 8 or 7 are subjected to dynamic conditions under water, they may encounter some water entry ! so do not go by the word that they can be submerged under water upto 1 meter ! its static test and not dynamic !

And finally one big difference is that iPhone 8 now comes with Bluetooth 5.0 instead of Bluetooth 4.2 which is going to deliver better Bluetooth performance overall, specially in terms of extended range, higher data transfer speeds via Bluetooth and the ability to add multiple wireless devices to the iPhone 8 that could be active simultaneously such as two wireless headphones or say a headphone and speaker.

So in this category iPhone 8 does have slight lead like we said from a purely build and design perspective we are at a draw. However the iPhone 8 has an edge over 7 in louder speakers and Bluetooth 5.0

Now lets move on to the Processor and Memory :

Now looking at these benchmarks it is clear that iPhone 8 is much faster in raw processing power than the iphone 7. Apple also says there is a 30% increase in the graphics performance as well. These power levels just blow the expectations. The iPhone 8 is already a powerhouse capable of recording 4K movies with ease running graphically stunning games without a hiccup but the iPhone 8 has more power which will more covert to more better looking games giving great artificial reality experiences via apps.

So clearly the iPhone 8 has massive here but it must be noticed the iPhone 7 is no sludge and can run heavy duty apps as smooth as butter already.

For now lets move on and talk about the Display :

Display size and display resolution are identical on both. The iPhone 7 has 4.7 inch LCD IPS 3D touch enabled display with the resolution of 1334 x 750 and 336 pixels per inches so does the iPhone 8, so its exactly the same. They also happen to have the same maximum brightness which is rated at 625 nits as well as the same color gamut. so you can expect the same level of visibility and quality from both displays no matter what you do.

the only extra feature that the iPhone 8 has is the True tone display option which can be enabled via software settings. Truetone simply adjusts the white balance based on the ambient light which gives you a better viewing experience in all kinds of environments, its great to have but not a killer feature.

Now lets talk about the software both the iPhone 7 and iPhone 8 run the same software which is iOS 11 with the exact same features including all kinds of 3D touch capabilities. iOS 11 runs smoothly and with exceptional stability on both phones for every day use.

You will also get access to AR which is Artificial Reality capabilities on both smartphones. So I am pretty sure the extra power on the iPhone 8 might deliver a greater experience but as far as overall experience including fantastic gaming capabilities we have a complete and total draw.

Now lets talk about the camera so on paper we have identical specs, firstly the front cameras are literally identical with 7 MP each and an aperture of f/2.2 and as usual their great for millions of useless selfies and video conferencing

So overall the iPhone 8 has the better rear camera, it has the new sensor and improved image processing, probably not for the average consumer which most of us are. But the improvement is there will say that an average user will not bend too much of the minute camera details so much, specially because the iPhone 7 camera is still a top rated camera. But be aware that the iPhone 8 has a lead here.

Now coming to the popular question :

Does the iphone 8 have portrait mode ?

Portrait mode is something that takes you to the true feel of owing a DSLR camera ! Wow !! Portrait mode allows you to compose a photo keeping the subject sharp while creating a beautifully blurred background like DSLR camera.

To create effect of depth of field like a DSLR camera iPhone uses the dual cameras on your iPhone, However this mode is NOT AVAILABLE in iPhone 7 or iPhone 8 BUT only available in iPhone 7 Plus, iPhone 8 Plus, and iPhone X.

Anyway lets move on to the Battery and Battery related features :

In this category we have some brand new additions instead of incremental update. First of both iPhone’s will give you a full day of operate for a medium use and perhaps you may have to plug it into a charger if you are a heavy duty user. But the bottom line is that they are going to offer identical battery life. New iPhone 8 actually outdoes the iPhone 7 with slight margin of 30 minutes to one hour, thanks to that newer more efficient A11 bionic processor and that’s not really the highlight here in this category the real thing is that glass pack on the new iPhone 8 it is now capable of charging wirelessly using the wireless G standards so you can pickup any wireless charger that uses the G standard and you can start to charge your iPhone 8 without any wires. Its not the new option in the market but its great option to have regardless

so in this category again the iPhone 8 has a lead, not in battery life but in the wireless charging option

Now lets talk about pricing and color and then move on to a crystal clear conclusion :

Finally lets start by things where the iPhone 8 either has improved over the iPhone 7 :

Final words and recommendation : Which one to buy iphone 7 or iphone 8 ?

iPhone 8 has the higher base storage of 64 GB and the new and most powerful A11 bionic chip.

iPhone 8 has an improved camera with larger sensor which can perform slightly better in photography and much better in videography with options such as 4K recording at 60 frames per second an option not even some expensive cameras offer.

and finally iPhone 8 has 25% louder sounding stereo speakers and Bluetooth 5.0 !

So if you already own an iPhone 7 then there is absolutely no need to upgrade, iPhone 7 still has a powerful processor capable of handling any task with ease, it has a top rated camera. Most people just use the camera to take photos and basic videos anyway, so the 4K option at 60 frames per second is great to have but its not going to be a common used scenario. other than that both smartphones looks identical, they are IP67 grade water resistant, they offer great battery life, they have the same touch ID fingerprint sensor and a smooth and consistent software experience

Now if you are coming from anything lower than iPhone 7 such as iPhone 6 or iPhone 6S, do upgrade directly to the iPhone 8 as the upgrade effect will be significant

But if you upgrade from the iPhone 7 to the iPhone 8 the upgrade effect will be minimal.

Now what if you are in the market to make a choice between the two the 7 and the 8 then you should probably get the iPhone 8, its $150 more expensive but it does come with the 64 GB of internal storage as against the 32 GB for the iPhone 7 base model

Bottom line is that if you already have the iPhone 7 you are in a great position, the only true upgrade you should consider is the iPhone X unless it is out of your price range ! 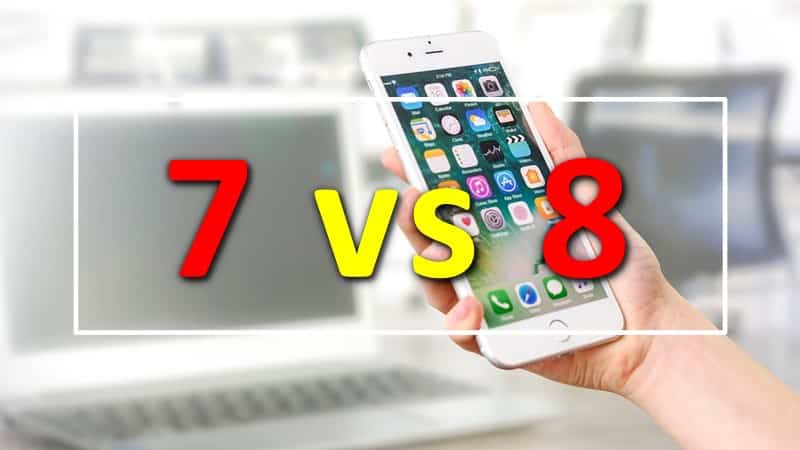