You are here: Home / Headphones / PowerBeats vs PowerBeats PRO | Which one should you buy & why?
Tweet
Share2
Pin
2 Shares

As the internet flooded with news of PowerBeats PRO, thousand of websites started discussion on Airpods versus PRO model. However it is clear that they both have distinct place in life  and can’t replace each other. So what will be interesting to study that will it be worth comparing PowerBeats vs PowerBeats PRO? and Which one should you buy? Let’s see that in my post.

Lets see in details for the features and specs of Powerbeats pro so that it will be easy to decide if you need to spend more dollars buying the latest headphones are be happy with the budget headphones you have.

PowerBeats vs PowerBeats PRO | Which one should you buy? 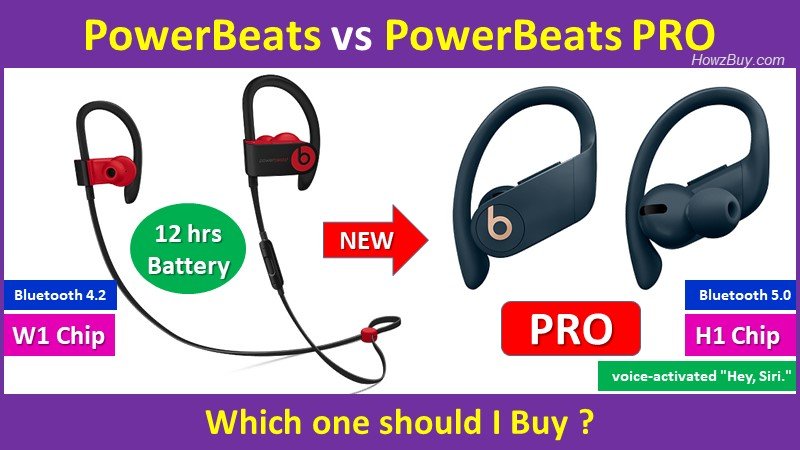 While the PowerBeats3 itself is a high seller and good sounding wireless headphone, the newly introduced truly wireless PowerBeats Pro sets off the market trend of Apples Airpods2 and more!

Lets have a deep look into What is that you get in the PowerBeats Pro version and is it worth it?

PowerBeats vs PowerBeats PRO | Which one should you buy?

Well people harping on PRO model being a competition to Airpods2, I will limit myself to compare it with the previous Powerbeats3 model and check if its really worth spending $250 at all?

Powerbeats3 uses a traditional neck string type design which connects two earbuds, making it safe from loss of single earbud, also it makes convenient to hand around neck while not in use, whereas the latest PowerBeats Promodel features separate earbuds which makes them contemporary, however you always carry risk of loosing one of them and again what to do when you are not listening to them? You can’t hang them around the neck, so even you want to take them off for a minute, you need to find a place to keep them which is quite annoying to me.

So I give here more marks to Powerbeats3

Only one area where PowerBeats Pro wins the battle is Auto Start-Stop functionality. Since the Pro automatically pause music when you take off by determining if the earbuds are inside ears or not, its convenient, but that’s not so major point to me. This will matter only when you are listening to audio books, where start-stop points are important.

So if you are audio book listener you may prefer buying PowerBeats Pro.

The PowerBeats Pro is powered by Apple’s latest headphone chip H1, which they are using in the new AirPods2. Definitely the upgraded chip H1 delivers faster and seamless connectivity using Bluetooth 5.0 to all all Apple devices. Also it makes switching between Apple devices briskly.

Not only this it enables voice control over Apple Siri voice assistant which was not there with the old chip W1 which is held in PowerBeats3 where you need to activate Siri using a push button on the RemoteTalk control.

And the Bluetooth 5.0 in PowerBeats Pro surely provides more stable connection due to the protocol sturdiness and long range transmission even with hurdles like furniture and concrete walls in between.

So in this case PowerBeats Pro is winner.

PowerBeats3 has traditional charging technique using micro USB port and does not even feature a charging case which most of modern headphones provide, however interesting part is that battery life of PowerBeats3 is much more higher than latest PowerBeats Pro! Also it can use standard Android mobile charger to get life back and you need not carry separate charger.

PowerBeats3 delivers 12 hours of music playtime as compared to only 9 hours in latest PowerBeats Pro.

Since the PowerBeats Pro have less music playtime, it is compensated by giving a charging case alongwith the earbuds, what it means is that you can power them up just by putting in its own carrying case (humm .. but do not forget to charge the case itself using the lightening cable !)

The charging case of PowerBeats Pro holds additional charge of up to 24 hours, which means you need no power assistance on the move, specially useful for the vivid travelers and hikers.

Of-course the new PowerBeats Pro deliver much more battery life as compared to the benchmarks in market such as  AirPods and Jabra Elite 65t, which only last around 5 hours on a single charge!

In my opinion in the area of Battery power PowerBeats3 is a clear winner. It also uses traditional charger which is easily available with anyone around even if you forget to bring one.

Someone who is frequent traveler though can prefer PowerBeats Pro with charding case, since he need not search for power points on airports or bus station and simply get charge using its own charging case.

Although many of professional websites have recommended these earbuds for workout (so as the company too) personally I would not prefer separate earbuds for workouts, since at times during workouts I need to take them off to take help from gym instructor or talk to buddy’s. I like hanging the PowerBeats3 around the neck rather.

However PowerBeats Pro are really helpful for frequent travelers due to its charging case, also one more point useful while traveling with my wife, we can share individual bud to watch the same movie without being tied up with each other. So as a frequent traveler I will prefer Pro model over PowerBeats3.

So in short PowerBeats Pro is an attempt to make the headphones more contemporary, modern looking, powerful fight to the benchmarks.

It has voice controlled Apple assistant Siri and mimics the Apple Airpods auto-On-Off function on removal from ears using sensors.

It also mimics the Apple Airpods charging case, holding 24 hours of charge in it.

So is it a real game changer? No in my opinion !!

If you look at price versus sound quality versus design, I will still provide full marks to the PowerBeats3.

They are a great work-out headphones indeed.

PowerBeats3 is an affordable option compared to the PowerBeats Pro giving same benefits of sound quality in less price.

Do not forget that still they use one of the best of Apple W1 chip for seamless connectivity with Apple devices, so as the quick switching.

Apple voice assistant Siri is available on a click of button, although voice control not available is a slight negative.

Mos liked part is the powerful battery life of over 12 hours of music playtime, which regains its life in just 5 minutes using quick recharge technique.

So if you ask me, at given budget still PowerBeats3 is an attractive proposition to buy.

Since the Pro is popping out in market, the PowerBeats3 are available at an attractive price range on online spaces like Amazon.

What is the difference between Apple’s W1 and H1 chip?