Undoubtedly Jabra Evolve series headsets 65 and 75 are the world class headphones for voice conversations, and best is easy switch between Music and conversation. And these headsets are specially designed for office environments and call centers with features such as RED busy light, in-line call controls with larger buttons, good passive noise cancellation, full day talk time. So in this post I will compare and review Jabra Evolve 65 vs 75 so as to take a call which one to buy and why? Obviously you need to know if its worth spending more $ to get hands on Jabra Evolve 75?

Jabra has understood the need, specially for the office where function is more important than anything else, obviously when you focus on design intent you ought to get the best design.

So in the Evolve series they have many headsets, however if you wish to buy wireless headphones then you have two options mainly Jabra Evove 65 and 75.

Lets see what are the differences in between them, first look at the specs and features comparison table and then goto the detailed review of each feature (if you have time). 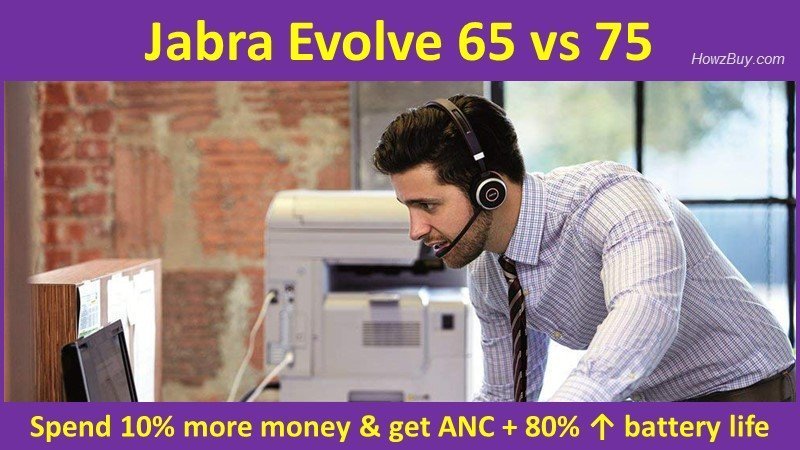 Since now you have see the specs compare, you can go into detailed review of each feature of 65 vs 75

Both the headsets are pretty stylish still simple in layout to stand out from the competition.

Its perfect balance of style and function, I can say simplicity at its best.

Both are made lightweight and comfortable with use of high grade plastic, with blend of rubber+silicone and a thin aluminium plate that makes the head strap. The headband top is covered with silicone kind of material to provide comfort, while the sides are covered with plastic.

The headband can be expanded to accommodate different head sizes, it uses standard pull-out mechanism found on most of the headsets.

Both headsets bears a flexible boom arm mic which can be pulled down quickly as needed. And with magnetic back, the boom sticks to the band when not in use, it makes very intuitive use of boom, simple but effective.

Both 65 and 75 does basic intended job of call conversations in descent way, on the music front I will talk later.

Only one tiny note for you – if you don’t like smaller ear cups, then forget about these headsets.

As said earlier, basic intention of these headphones is to have call conversations with breeze inside office environment.

So when you are talking over a call with busy office environment bombarded with noises of people gossiping, laughing, talking on phone and buzzing around you, call voice quality is not the only solution.

So apart from driver delivery of mid range voice communication, you also need to have noise isolation or noise cancellation.

One more thing, this headset stops music play automatically when you receive a call and resumes as soon as call ends. This is a good feature indeed.

65 features basic noise isolation, which means physical barrier in between your ears and noise source. This form of isolation works best when the headphones snug fit you very well and the pads create perfect seal with ears. However this is not the best form of isolation, but surely helps to some extent giving you a break from unwanted noises around you.

75 uses passive isolation as well as active noise cancellation, which turns ON with ANC button on the left ear cup.

What it means is that it takes you to the next level of quietness with mics catching outside environment noises and generating opposite sound waves to cancel the external noise, thus effectively giving you more quieter environment ensuring a perfect concentration on your work.

Evolve 65 features 28 mm drivers which are upgraded to 40 mm in the latest evolve 75.

Surely these are not the best sounding headphones! but if the main focus is call conversations, then you have chosen the right once.

They play crisp and clear vocals during calls, and complimentary bass while you play music. However the treble and bass are so overpowered that sometimes the mids get a hit.

Now coming to another area where productivity matters.

Both headsets feature call controls on the outer shell of speakers, and are logically placed.

Buttons are also pretty responsive, and works like a breeze.

Only one hitch I found is slight delay in mute button function, but that’s minor. You need to press and hold the “volume down” button for 2 seconds to mute or unmute.

First let me talk about charging dock, which provides you an elegant way of keeping the headphones on office desk still charging them in the background. It looks neat and clean, to compliment the office table setup.

Evolve 65 had battery life of around 10 hours in a single full charge, which has been enhanced to 18 hours with upgraded Evolve 75.

Both headsets gets to full charge in 2 hours time and both have 15 days of standby time which is more than suffice.

Tip – You can charge the headsets using USB cable while using them.

The range of Bluetooth is good till 100 feet while connected to the laptop using USB dongle and 33 feet when connected to your smartphone.

Note – remember that these headsets do not have 3.5 mm jack, which means they need to be connected only using Bluetooth.

I am not sure why you need NFC pairing for these headsets, since generally you will not be doing it each day, certainly not in office, anyway.

The Evolve 65 does have NFC pairing feature, which allows connecting to your NFC enabled smartphone by simple tap. This works really well and is a lot easier than any other Bluetooth pairing you will experience.

Evolve 75 does not have the NFC feature, but as said its not a major determining factor, and that may be the reason behind removing it.

Main function is to help you doing business calls, which means most of the time utilization will happen in office environment.

So the first simple and most helpful feature of these headsets is busylight feature.

busylight feature is nothing but a RED ring lightup on the outer shell of headset, which indicates someone looking at you that you are on a call. Unfortunately this ring is shown on only one side of headset! which means person looking at you have 50% chance to see this ring!

I feel two improvements can be done by Jabra, first is to have this ring lighting up on both sides and second is turn it green when you are available to talk, something like available on Blync or Kuando busylights.

While I talk on spending around $200 to buy a headphone for office use, specially with good mic boom, both headsets does pretty good.

Evolve 75 also gives you 80% more battery life which covers a full day or even two days comfortably. (18 hours as against 10 hours of Evolve 65)

Do you need to connect to your deskphone? Check Jabra’s compatibility guide.