While I decided finally to cut the cord and get a wireless gaming mouse in budget of around $150 I have three top notch options Logitech G Pro Vs G502 Lightspeed Vs G903 Lightspeed Wireless Gaming Mouse which are most popular intuitive designed for intense gaming.

Since all the three models priced the same it is important to see what are the architectural differences (performance wise), ergonomic differences and key parameters that will make me choose wisely to suit my needs.

I know choosing the right gaming moose will not be harder then you expect !

As against that they have also came out with an option like the Logitech G Wireless Pro lightspeed wireless mouse which is simple, more traditional looking, have bare minimal thumb switches, super light weight (important for intense gamers)

What is Logitech LIGHTSPEED Wireless Technology?

In short Lightspeed brings wireless mouse at part with wired connection in terms of latency.

The Pro and G series which are powered by Logitech own Lightspeed technology are priced slightly different than the normal gaming mice, so its important question to my mind “What is the Lightspeed wireless?” which makes it a winning combi gaming mouse.

LIGHTSPEED delivers wireless signal strength up to 16x (12dB) higher than the competition, further strenghtened with a unique Frequency Agility Mechanism which automatically avoids problematic interference which can be caused by other electronic devices including your own keyboard, hence delivering smooth and consistently endless  gaming experience.

POWERPLAY is cherry on the top …

All these LIGHTSPEED gaming mice can be further powered by a wireless charging system aka POWERPLAY.

POWERPLAY means that these gaming mice can pair directly with the POWERPLAY’s integrated LIGHTSPEED wireless receiver for optimal signal strength and the convenience of charging and data over a single USB cable.

Are you right handed or lefty?

One more important factor that should not be missed our it Right or left-handed ambidextrous design. Its well known that many of the right hand people also use left handed mouse efficiently when gaming for hours !

Beginning of my research is with preparation of detailed technical specifications comparison chart of all three gaming mice which will provide me an idea of which one scores better over another and in what aspect.

Of-course .. I will be looking at functional aspects too after the specs comparison .. 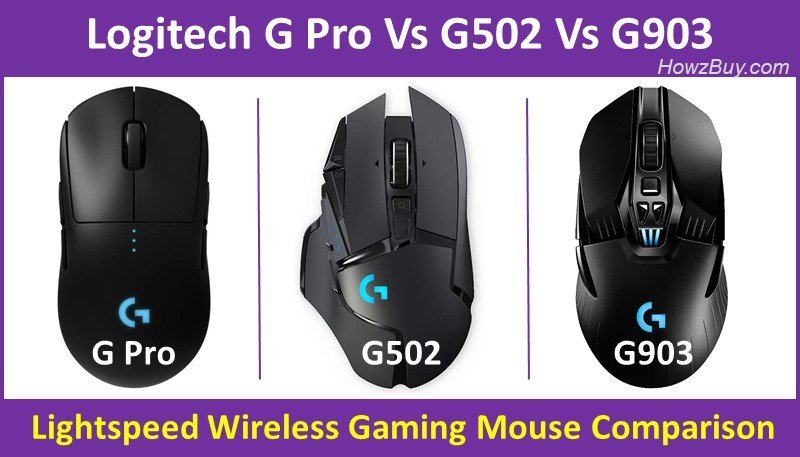 lets look at the table below …

Also its important to look at which games you are looking at and what is the daily time you spent on those games .. also many people prefer gaming mouse for design work due to its low latency and multi function button capability.

or you may think of using it for design work.

Lets look at features of each mouse and then compare them against each other ….

Logitech G Pro is perfect combination of function and technology. The design has went through iterations based on direct feedback from over 50 professional esports players.

Powered by HERO 16K sensor G Pro can clock speeds over 400 IPS and deliver peak performance at any dpi with zero smoothing or filtering.

Most interesting thing is weight of mere 80 grams ! With its incredibly thin shell, innovative ladder-chassis design and advanced battery, the package is evolved in only 80 grams !!

Further you can configure your preferences using Logitech Gaming Software (LGS) the six buttons can be configured to activate in game commands as needed.

For those who likes funky gaming .. get customized lighting with its 16.8M colors which can be configured to sync with other G products like keyboard etc. If you like ….  use LIGHTSYNC to come out your mice with game-driven lighting effects which will reflect to in-game actions.

In simple words the G PRO mice can be used for professional gaming with its super advanced technology delivering high performance, precision and speed which is required to win the game.

Basic shape and size of G Pro is much more smaller allowing you to suit palm, claw and fingertip grips, but this is totally subjective feeling and I suggest you to get feel of each of these mice before taking a final call.

The biggest ergonomic difference can be felt due to the mice length. With big hands and long fingers you may prefer to go for G903 in place of G Pro.

Also the weight factor plays an important role for long hours of gaming !

However remember, lightest may not always means the best, so G502 & G903 provides facility to add weights to the mice (it can hold more weight below the mice cavity) – depending upon your personal preference again the choice between three matters.

G Pro DPI / sensitivity button is below the mouse which is practically useless in gaming world !

G903 DPI / sensitivity button is located near the scroll wheel which is most preferred location as per most users.

G Pro and G502 works upto 48 hours in single charge in lights ON mode, which means you can use it for a week without need to get back to charging station. In case you wish to prolong the life, lights OFF mode gives you 60 hours seamless operation 🙂

However here the winner is G903 with its marathon battery life of 140 hours with lights ON mode and 180 hours in lights OFF mode !! Means you can simply charge it once in 15 days !

G502 brings some real game difference with its ability of 5-minute quick charge capability to deliver an extra 2.5 hours of gameplay.

Having said that G903 is winner in battery life, this winning difference can become void in a second if you start using a wireless charging system!

All the three mice models are compatible with its innovative POWERPLAY continuous wireless charging technology.

Its as simple and intuitive as you read, yes …. the mice pad will keep charging while you are gaming !

So you need not ever worry about charging your mice in lifetime !!

And bonus is that it has an Integrated light speed wireless receiver ! Wow !!

So whats the bottom-line?

Finally it is important to get hands on experience at least for an hour on each of these gaming mouse since subjectivity matters a lot.

Also you may take recommendation from friends considering all the aspects that I have talked sine beginning of this article.

Do let me know which Lightspeed wireless gaming mouse you chose and WHY? Feel free to put in comments below.