You are here: Home / how to / 5 Easy Ways to Fix Snapchat Camera Not Working or Black Screen issue
Tweet
Share
Pin1
1 Shares

If you are facing issue of Snapchat camera not working or Snapchat camera black screen issue on your Android or iPhone then you are on the right page. This article will guide you on 5 Easy Ways to Fix Snapchat Camera Not Working or Black Screen issue.

The issue might happen randomly showing no assignable cause or particular action which has caused this black screen issue. So you will remain clueless on what to do and how to resolve this issue on Snapchat!

This problem happens not only of iPhones but also on Android devices indicating both OS users facing this issue.

Users search query has surged to highest, and I can see people spending countless hours to get right resolution to the problem.

So many of you must be frustrated due to inability to send snaps to friends! finally social presence is more than a necessity in covid19 pandemic days.

But before giving up, better to try some simple fixes which might help you resolving the problem, and if you find this article useful solving the screen black issue on Snapchat, do let me know via comments below 🙂

Just for your knowledge, someone has said that they are working on resolution —

We're aware some Snapchatters are having trouble using the app right now- hang tight, we're looking into it!

Most of the fixes given below for the Snapchat Camera, may resolve issues such as image quality problems, sound issues, and trouble using Long Snap.

There are many definitions to this problem, just check if any of below matches to what you are facing then you are on the right page … resolution is available for you – 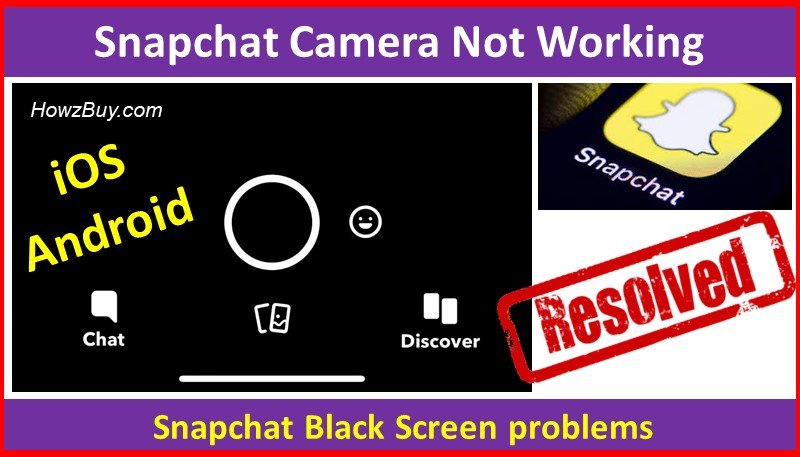 I have enlisted the countermeasures to be taken in sequence, if the first one does not work then please proceed to try the next one –

Workaround ONE is to Reboot your device –

1) Reboot Your iPhone or Android Phone

For most of the screen blank issue or in fact most of the other issues are commonly caused due to software errors, corrupted memory, malfunctioning which generally happens when you have not restarted or shut down your phone for days or months!!

So you may not believe but rebooting the device (which ever you are using for Snapchat) may help.

I have seen that in most of the cases this workaround works.

Step-1) Press and hold either volume button and the side button until the power off slider appears.

Step-2) Drag the slider, then wait 30 seconds for your device to turn off.

Step-3) To turn your device back on, press and hold the side button (on the right side of your iPhone) until you see the Apple logo.

Step-1) In most Android phones, pressing the power and volume down button simultaneously and holding down for 5 seconds will hard boot the device.

Note 1 : This should work for most of the stock Android device like Google Nexus and Google Pixel, Samsung Galaxy, and LG phones.

Tip : If at all for some reasons, you feel that this process is too much complicated then just do not charge your mobile and let the battery die, then plug it into the charger, this will restart the mobile at its own.

Now if this hard boot does not work then proceed to the next step.

Workaround TWO is to Check for Snapchat Updates –

2) How to Check for Snapchat Updates?

You need to check the iOS App Store or Google Play Store to check if your Snapchat is up to date!

Tip : If you are facing issues updating then simply try Uninstall the App and reinstall

Workaround THREE is to Check Your Internet Connection –

This is again a workaround based on the practical trials.

Mostly when the Snapchat App is using camera, it needs to transmit the data via internet protocol to your smartphone for synchronization and recording, but when it does not get internet connection the data transfer may get interrupted, displaying a blank screen.

Simple way is to Switch between mobile data and Wi-Fi.

If switching either to Wi-Fi or mobile data resolves the black screen issue, then you can resolve data connection issue later with your mobile service provider or internet service provider.

This is my own logic and analysis! not sure if its correct!!

Workaround FOUR is to Restart the Snapchat App –

4) How to restart the Snapchat App?

So next attempt is to close the Snapchat app. Then goto app settings to clear the data & cache. Now restart the app, you may find camera started working.

How to clear the app data and cache of Snapchat?

Tip : If you are facing issues closing the App, it might have gone in hand state. Try Uninstall and reinstall the app or force close it.

I am sure by now you must have the Snapchat blank screen issue resolved, but in extremely rare cases the problem persists then Workaround FIVE is to CHECK the camera permissions –

If all the above does not work, there can be one more reason of upgradation of your iPhone iOS.

If your iPhone have iOS 14 Beta version, due to the OS’s privacy features there are chances that Snapchat’s camera permission could have been revoked.

To check if this has happened, on your iPhone go to Settings >> scroll down to see the installed apps >> tap on Snapchat >> check if the toggle adjacent to ‘Camera’ is turned ON.

For those who have Android phone this issue is unlikely, however since nothing of first 4 tricks have worked, there is no harm in checking this aspect. May be your anti-virus has blocked permissions due to your command? who knows?

So on Android, go to Settings >> tap on Apps >> open Permission manager >> Tap on Camera >> Scroll down to Snapchat >> check if it’s set to Allow

If you have applied some other method which resolved your issue, then please let me know it via comments below the post 🙂

IF NOTHING WORKS! BAD LUCK!!!

Its time to escalate your case to support team (if needed).

All above are temporary fixes which have worked for different people, however its is clear that sometimes Snapchat have to take care of this with a App bug fix update ASAP.