When I heard on launch of latest headphone m3 in the Wh-1000x series by giant Sony, then first thing that came to my mind was about the famous headband crack issue faced by many customers on the Sony wh-1000x m2. Obviously it will be interesting to know if Sony design engineers have worked out on this issue as well as any further improvements made during the launch of Sony wh-1000x m3 headphones. A simple study done to check what all is that improved and is it worth spending around $350? buying these latest headphones from Sony?

So in this post first I am going to compare the technical specs of Sony wh-1000x m2 vs Sony wh-1000x m3, this is just to get an idea over the basic design aspects of the product and then secondly I will be comparing if there is any improvements made by Sony in terms of product features as such.

So finally I will be concluding with bottom-line on if it is really worth going for this newly launched Sony wh-1000x m3 headphones?

So lets begin by the specs compare table, wherein I have highlighted the strengths of each version with the green background color for quick and easy identification.

So now lets see if really the new  Sony WH-1000XM3 are the best noise canceling headphones in market? 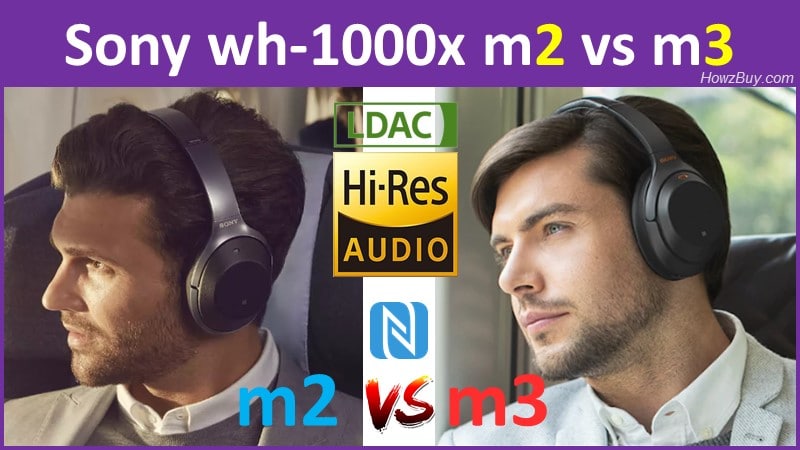 Look at the above photos wearing the m2 and m3 headphones, you will not notice substantial difference in the looks, except that on Sony 1000XM3 the logo is flaunted in the Rose Gold color with external mics highlights in the rose gold finish.

The Sony WH-1000XM2 had a leather styled texture onto the earpieces giving somewhat rich looks and feel, whereas M3’s have very fine texture, mostly my technical guess is fine texture will improve onto the touch control response.

First thing looks to be improved is the ear room.

If you have bigger ears the new m3 slimmer profile earpieces will help you for sure. New m3’s have more room inside the earcups for your ears, thus allowing your ears to fit entirely inside them.

Second thing that looks to be improved are the headbands.

But not sure on the durability aspect of the headbands, wherein as per customer reviews both the previous models showed headband crack issue … Sony has not clarified if they have worked on this issue at all and improved on the materials or design.

Although some early videos of the product evaluation showed that they have twisted the headphone band like anything and it won’t break, this is inline with the what I have heard of reinforced headband hinges. However I would suggest to wait for some time before you buy new M3’s giving you benefit of lowered price as well as confirmation on headband crack issues.

Operation of music and call control is one of the vital aspect of any headphone, as important as the sound quality I would say.

So in the new M3’s Sony seems to have worked on control buttons, which are now raised to get touch feel during blind operation. So new M3 buttons are more easy to find (and clearly marked too), this facilitates switching between noise canceling modes quickly and easily.

Further improving the texture on earcups has facilitated quick response from the most famous touch controls on the Sony 1000X series of headphones, they are super easy and intuitive to use.

I love this super easy touch control which allows change of volume by simple up/down swipe of finders, double tapping to pause or play … and if you hold it for a second it invokes the AI assistant … And fantastic feature is when you want to talk to someone, no need to remove the headphones and pause what you are listening to .. but simple gesture of  hand over the earcups will disengage the ANC to listen to someone who is talking to you.

I feel Sony mark 2 and mark 3 headphones are most superior in the touch control feature which no other headphones feature to this extent . you simply forget about fiddling around finding small buttons and remembering which one is for volume lowering and which one to skip the track! 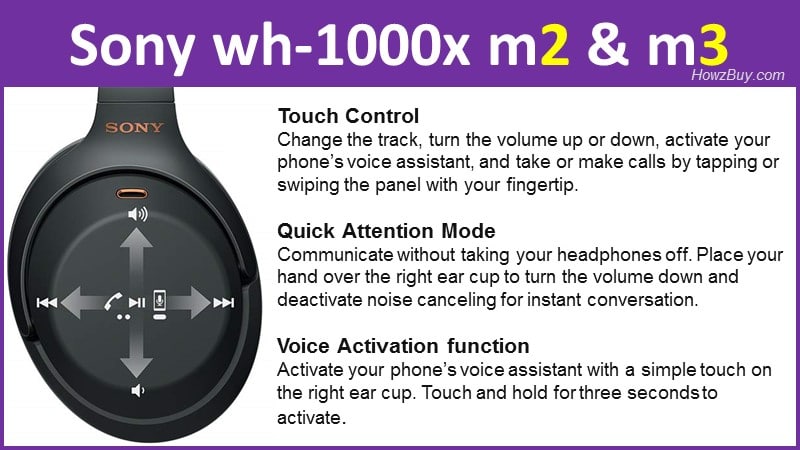 Innovation to its best – Barometer

Some of the shortcomings from the m2 are addressed in m3 as well as some improvements are done through innovation by Sony engineers.

First thing is the voice calls over 1000XM2 were not that good, which have been improved in the new 1000XM3’s. Now this does not reflect in any of the technical specs of both headphones on both headphones pages on Sony’s website (see in reference section for links). However as the users and websites has reported there is surely improvement seen in the call quality on 1000XM3’s over 1000XM2’s.

As I get hands on the new M3’s I will surely test them in different environments to see just how much they have improved.

What innovation I found is about the barometer which measures the atmospheric pressure and adjusts the NC.

The NFC works well as it was working in the M2’s … nothing new in this area as such .. however again here you can connect with one device only with NFC, which should have been improved at least in the new M3’s. What do you say?

But at least I am happy that tapping on the back of earcup allows quick connection with handset, without navigating to menus and submenus of the Bluetooth settings  …

Overall the intelligence of M3 has improved over M2’s by a bit …..  You can see its being moving to the artificial intelligence understanding the human interface and responding to the needs …

Sound Quality – All that you expect from the best

Now when I have talked much about the function and design aspects … I will talk about the main function of any headphones .. which is listening experience … the quality of sound it can deliver …

Using Bluetooth 4.2 the new M3’s delivers 24Bit / 96 Khz playback without any latency … Its simply the race between two giants … wherein Qualcomm AptX is trying to catch up with Sony’s LDAC … Lets see who wins over battle of time and money …

Further coming to the NC quality, M3’s demonstrate noticable improvements over M2’s. The amount of noise that can be cancelled is now even better than before.

Winning the battle of features over M2’s

As said earlier … the addition of barometer adds an intelligence to know the atmospheric pressure around you and deliver optimal sound quality by refinements in the algorithm. If you really want to challenge this feature simply use the headphones during air travel and with the extinguishing boom noise, you will realize the power of barometer … I feel this is where the Sony wins the battle over BOSE QC series …

What this means to you is, fastest charging possibility … Yes, simple 10 minutes charging results into whooping 5 hours of playback time! Simply amazing … if you are a frequent traveler than nothing more than this can be prayed for… Simply great !

By the time you finish your shaving and showers, the headphones will be ready to deliver music for a day! Wow!!

I think Sony’s new M3’s are the most powerful headphones if you compare the quick charge mechanisms claimed across by competition including BOSE.

Now even the Mark 2 delivers around 40 hours of music playtime as compared to only 30 hours of Mark 3, the quick charge compensates over the loss of 10 hours!

If I count on all the benefits derived from the new Sony WH-1000XM3, I can say that these are one of the best Noise Cancelling headphones in the market today .. Yes, even when you compare them with the BOSE QC35II.

The overall look and feel of the Sony M3 headphones are spot on, in-spite of improvements such as barometer, they are super lighter than the prior M2’s and much more comfortable with added material on the headbands.

They fold compact while you are not wearing them in the nice and small protective hard case, which is a must for frequent traveler like me.

Well if you already own a pair of Sony WH-1000XM2’s then honestly looks like not worth spending $350 to upgrade the latest version. What I mean is that it’s not a STEP high for M2’s.

I am sure only getting the Rose gold logo and a barometer, with some refinements in the microphone quality .. Plus the quick charge capability with the USB C may-not worth spending money again just to switch from the m2’s, in that case better to wait for some more time, till you get a step upgrade than the M2’s.

In short I do not recommend it for those who already own the Sony M2’s.

Are the worth buying over the Bose QC35ii?

Well to get the answer you need to wait for sometime, since I will be writing a detailed review on comparison of Sony WH-1000XM3 vs Bose QC35ii.

But if you are thinking on buying a new pair of True Noise Cancelling headphones, then surely Sony’s new WH-1000XM3 are worth spending money for.

Connecting the headset to 2 Android smartphones

Connecting the headset to an Android smartphone and an iPhone