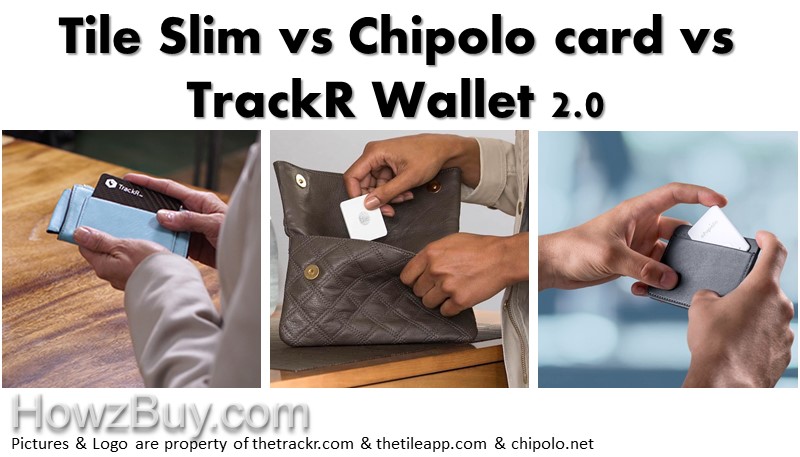 The next generation of Bluetooth wallet or key finders are becoming more and more thin and loud .. thin that too with increased Bluetooth finding range!

So with latest news of launch of the thinnest and loudest Bluetooth wallet finder, we decided to check the claims by different highest selling wallet finder gadget companies like Tile, Chipolo & TrackR and compare them for dimensions and features.

What is this Bluetooth tracker Device?

Bluetooth trackers or Wallet Finders or Key Finders are small battery powered gadgets which can be attached or put inside your wallets, purses and passports, hybrid wallet-cases for smartphones, tablets, and Kindles.

Items can be tracked by ringing them from a distance of about 100 to 200 feet (Depending upon the device and range) or if lost it can be tracked from crowd GPS network. (Note that Tile has largest subscriber base as on now for Crowd GPS)

So lets begin with comparison chart of dimensions and features of these trackers.

Which is Thinnest BT finder?

First thing to note is that with new launches, Tile Slim will be no longer the thinnest bluetooth key finder !

Although in terms of thickness TrackR Wallet 2.0 claims to have only 2 mm thickness, technically it is the thinnest BT finder as on Aug 2017.

Second thing is that Chipolo CARD boasts to have double the Bluetooth range compared to Tile and TrackR, which terns out to be 200 feet.

First thing is that only TrackR Wallet has replaceable battery, whereas other two i.e. Tile & Chipolo needs to be replaced if battery goes off.

Second thing is of Battery Life, Tile Slim & Chipolo CARD claims One year of battery life as against TrackR Wallet 2.0 has only 6 months of battery life, which is too low in my opinion. (Although you can replace TrackR batteries)

Which is the thinnest and loudest wallet finder?

Of all above looking at the specs available on internet ( as on Aug 2017), we found that Chipolo CARD is the thinnest and loudest bluetooth wallet finder in market.

The launch is planned Early September 2017 for both Chipolo CARD and TrackR Wallet 2.0, lets wait for the same, the first one who gets into the market becomes the worlds thinnest Bluetooth tracker.