Will all said done, you will realize that the latest 3rd Gen Echo dot is a smart speaker which is flexible, robust, and intuitive but also cost as less as $25 (as checked on 9 July 2020 – Get latest deal here ) Also while searching for the third gen echo dot the auto-search suggestion showed me “alexa echo dot 4th generation” option, however its not launched till now! since I want to by one more dot for me, I will wait for the alexa echo dot 4th generation launch.

What is the difference between Amazon Echo Dot 1st Generation vs 2nd vs 3rd Generation?

Yes, you are on right page to understand this difference.

Before the launch of Amazon Echo Dot on 20 October 2016, the upgrade has happen to Second Generation and now in 2019 Third generation, So you want to know what the hell it that they have improved or changed in between the 2nd gen echo dot and latest 3rd Gen?

From the First to Second Gen … The Dot became smaller, I mean the diameter remained same, but the thickness reduced by 0.2 inches. Still it can remote control home lighting, play music for you, operate a timer, answer questions, read books ! Get latest movies being played at your local theater … that too in amazingly small size !!!!

From the Second to Third Gen … The Dot increased in diameter as well as in thickness (dia increased by 0.6 inches and thickness increased by 0.4 inches). I will be interesting to know the reasons behind increase in overall size. One prominent change that I can imagine is the Speaker size, 1.1 inch speaker in 2nd Gen became 1.6 inch in 3rd Gen with louder sound output (12 dB more)

Coming to the Second generation echo dot, it’s just fine tuning that Amazon has done over the 1st Gen Echo Dot, You will notice that they are mostly related to ergonomics of buttons as well as improved voice recognition tech, also the ESP shall help placing multiple dots in the same home in synchro.

The first Two changes between these two generations of Amazon Echo Dot which are Ergonomic Changes rather than Technical ones, remaining are Technical improvements given to the Echo Dot Upgrade

Rest of the things in the New Echo Dot 2 are same as Echo Dot 1, with support for hands-free Alexa commands, connection to external speakers via Bluetooth or 3.5 mm cable, a small built-in speaker etc.

While people complain that in noisy environment the Echo Dot Voice Recognition system confuses, I have solution for that .. read details on how to resolve Echo Dot listening issue in Noisy rooms … 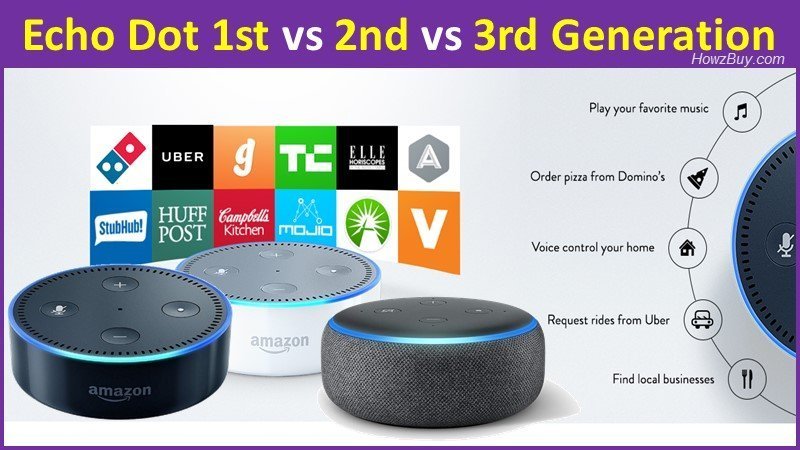 As said in the beginning of this post, the Amazon Echo Dot 3rd Generation has changed in terms of hardware dimensions as well as aesthetics, which sets it apart from the 2nd Gen and even 1st Gen Dots.

Main change in 3rd Gen dot is look and feel, mostly looks like the refined look has been inspired from the Apple’s Homepod or its own full size Amazon Echo.

So the third gen comes with a rounded edge, fabric coating and softer look than before. You will see less plastic than before.

Some more aesthetic changes done on the control buttons placed over top of dot like Mute button pictogram has been simplified — the microphone has been replaced with a simple circle with a line through it.

The new speaker of the 3rd Generation Echo Dot has got bigger and better, the diameter of speaker itself has been increased by 0.5 inches which delivers 12 dB louder volume.

The Speaker wraps the entire edge of the Dot, for Omani directional sound delivery.

The speaker performance has surprisingly improved as compared to all prior generations, best for living room use now. And if at all you want to use it as a music system, then go ahead and connect it to traditional big home speakers using 3.5 m output jack.

The 2nd Generation Dot is powered via micro USB power.

Whereas the 3rd Generation Dot is powered via a power pin connector.

What it means is that you need to have separate proprietary power connector for use rather than having standard micro USB which is used for most of the Android smartphones as on date.

The Alexa Dot 3rd Generation has further enhanced ability to pair with music streaming services like Apple Music, Pandora, Spotify, Sirius XM, iHeart Rario and Tune In which is the MOST IMPORTANT thing in itself.

What it means is that even you are a Apple freak and have subscription of Apple music, simply go ahead to buy the cheapest small dot third gen version.

The third gen system further connects to your smart home devices through systems like Samsung SmartThings or Philips Hue etc.

Till the second gen you needed to be dependent upon built in Alexa skills.

In the latest 3rd gen, you have ability to enhance the skills using Third part apps and products which are accessible through Alexa.

What it means is now with voice commands, you will be able to speak and communicate with third party devices.

Like playing a favorite radio station, and / or integrate a variety of other smart home connectivity functions controlled by Alexa.

Echo Dot case – if you are having old echo dot, then this is the choice for you.

Read the most popular posts regarding Amazon Echo Devices …

What’s the Difference Between the Amazon Echo and Echo Dot?