Every electronic gadget in world like headphones, soundbars, portable Bluetooth speakers, smart watches have Bluetooth facility for communication to other devices and transfer of data. It facilitates wireless transfer of data, music, videos and what not. So question to my mind is What is latest Bluetooth version? Well it is Bluetooth 5.0 and we will see details of it in my post.

In the beginning Bluetooth had two issues, first is high power consumption thus calling for installation of powerful battery and second one was unstable connection, thus users experiencing issues while listening to music over headphones through Bluetooth connection.

As Bluetooth became an inherent part of electronic gadget, it became important to optimize it for consumption of battery power from any gadget. So the technology improvement brought you Latest Low energy Bluetooth protocol BLE and providing you more stable connection as well as extended battery life.

So as a curiosity it is important to know precisely what is that makes happen as compared to the standard old Bluetooth protocol.

First lets understand “What is Bluetooth” ?

What Is Bluetooth Low Energy (BLE) then? 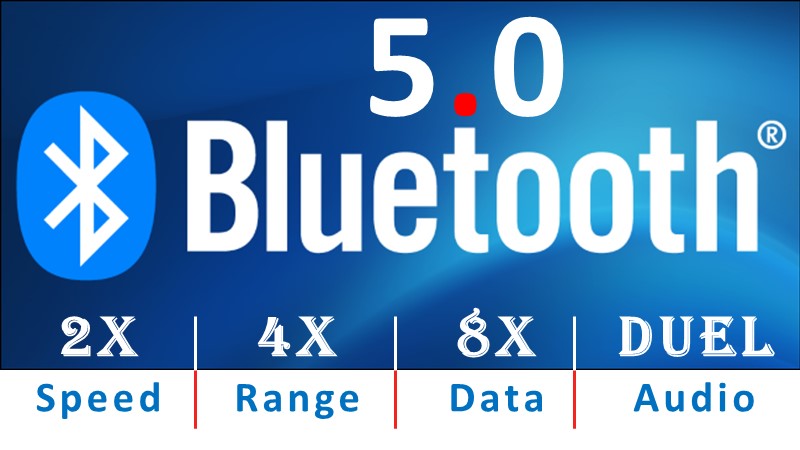 With a super long range of around 800 feet, home those improvements will slowly extend to IoT devices (Internet Of Things), hopefully replacing WiFi devices with simple Bluetooth 5 connectivity for smart home devices.

Although Bluetooth 5.0 will provide great benefits for gadgets like Headphones, Earbuds, Key finders, Mobile phones, it may not be that much great benefits to items like a Bluetooth mouse connecting to your laptop!

Till now only few mobile phones are supporting the latest Bluetooth 5.0 protocol including iPhone 8, iPhone 8 Plus, iPhone X, HomePod and the 2018 MacBook Pro with Touch Bar, Samsung Galaxy S8.

But having said that most of the companies haven’t started yet building Bluetooth 5 compatible devices! Its obvious that in a customer driven industry, so unless someone comes up with super idea changing the way things work today, BT 5 may not go on high speed track at all!

Is Bluetooth Radiation as Dangerous as Cell Phone Radiation?

How to connect two Bluetooth devices ?